The Constitution and Rules of the

Name
The Society shall be named the Rotorua District Residents and Ratepayers Society Incorporated, hereinafter “the Society”.

Purpose
The purpose of the Society is to require local government in the district to conform with principles of constitutional and administrative law and statutory purposes to the benefit of the inter-generational public interest such as to advance public trust in government.

Objective
The objective of the Society is to promote and advocate social, economic, environmental, and cultural well-being in the district of Rotorua, as preferred by residents and ratepayers.

Subscription
The Committee is to announce the annual subscription for the following year at the AGM.

Annual General Meeting
The annual general meeting (AGM) of the Society shall be held by 31 December. The date of the AGM shall be notified to members by email or postal circular at least 20 days prior. The AGM agenda shall include:
• presentation of the Annual Report and Financial Statements for the past financial year ended 30 September,
• election of each of the members of the Committee for the ensuing year,
• the subscription rates for the ensuing year,
• consideration of matters for which due notice has been given to members,
• transacting of any other general business that is in harmony with the objectives of the Society, and
• appointment of an Accounts Reviewer.

Special General Meeting
A special general meeting (SGM) may be convened by the Committee for any purpose that it considers appropriate upon receipt by the Secretary of a written request signed by no less than 10% of the members that exist as at the date of the Society’s receipt of the request.
The business of an SGM shall be notified to members by email or postal circular at least 14 days prior to holding the meeting. A minimum of 10% of the members that exist at the date of calling for a special general meeting must be present at such a meeting, either physically or electronically, and only business of which proper notice has been given shall be transacted.
In a situation where an SGM may not be convened due to it being a public health risk, or prevented by some other form of natural disaster, then the Committee may conduct a SGM using electronic media or over a period using email to declare the business of the meeting, consult members and pass resolutions .

Voting at General Meetings
All motions at general meetings shall be decided by a simple majority of members.

Proxies
No member shall be entitled to appoint a proxy to attend or vote at any general meeting or Committee meeting of the Society.

Nomination and Election of Officers
Written nominations for each officer and ordinary committee member shall be made for the AGM at which an election of the Committee is to be held, such nominations (which must include the written consent of the nominee) being in the hands of the Secretary within 48 hours of the commencement of the meeting.

If the number of nominations is insufficient prior to the AGM then nominations may be accepted from the floor, with the consent of the nominee. No person shall vote or be nominated for a Committee position unless their subscription is current. Election shall be by ballot at the meeting.

Powers to Co-Opt
The Committee shall have the power to co-opt additional committee members from amongst membership of the Society to ensure that the Committee has an adequate skill mix and to enhance its capacity to respond to issues as they arise.

Chairperson Responsibilities
• The Chair shall cause to be prepared a draft Annual Plan of activities and campaigns in consultation with members of the Society.
• The draft Annual Plan shall be submitted to members for feedback at the Annual General Meeting or as soon as possible thereafter and then to the Committee for endorsement and implementation.
• The Chairperson shall call meetings of the Committee as appropriate, have oversight of campaigns, and prepare the Annual Report of the Society prior to ending his/her term in office.
• Activities and campaigns outside of the annual plan can determined at any time by the Committee.

Secretary Responsibilities
The Secretary shall carry out the instructions of the Committee.

The Secretary shall conduct all correspondence, keep a minute book showing the business transacted at each meeting of the Committee and the Society and otherwise perform all those duties usually pertaining to the office of Secretary.

The Secretary is to ensure that an incorporated society report is filed each year with the New Zealand Companies Office after the AGM has confirmed accounts.

Treasurer Responsibilities
The Treasurer shall:
• Receive and document all moneys payable to the Society and deposit such moneys in the name of the Society in such bank as the Committee shall direct.
• Keep correct records of receipts and disbursements of the Society, pay all authorised accounts
• Furnish to the AGM a set of financial statements that truly and fairly record the results of the past year’s financial performance that have been audited by an Accounts Reviewer appointed by the Committee, and
• Keep an up-to-date register of all members and ensure that the register shows name, address and occupation of each member, the date they joined and all subsequent changes, and if required, submit a list of all members to the Registrar of Incorporated Societies.

Alliances and Donations
• The Committee may form alliances locally, regionally, nationally and internationally with individuals and organisations whose purposes coincide with those of the Society.
• The Treasurer shall accept donations from donors as the Committee shall direct. Alliances, endorsements, and donations do not confer membership of the Society.

Endorsements
The objective of endorsing mayoral and councillor candidates is to select a Campaign Team committed to winning office in order to implement the values and policies of the RDRR.
The purposes of endorsement are to:
• Enable members and prospective candidates to participate in a democratic selection process, by simulating the processes used in local authority elections.
• Prevent potentially damaging competition between potential candidates prior to the endorsement process.
• Maximise the development of campaign teamwork through the collaborative development of the campaign immediately after endorsement.
Criteria for endorsement are:
• The capacity of nominees to maximise the electoral chances of installing a mayoral and councillor team (i.e. their knowledge, skills, attitudes and experience of successful political campaign teamwork, including a track record of service to the Society) and
• The capacity of nominees to achieve the Society’s policies through the governance of the Rotorua District in order to promote social, economic, environmental and cultural well-being.
The candidate endorsement process will be initiated by the Committee with the appointment of two Returning Officers at their first meeting in each election year or whenever a vacancy is declared on Council requiring a byelection. The Returning Officers will, in sequence:
• Invite all Society members by email/ mail to nominate/self-nominate for endorsement as mayoral and/or councillor candidates.
• Verify each nominee’s willingness to stand and to guarantee their acceptance of the objective, purposes, criteria and outcomes of the endorsement process.
• Invite not more than 250 words from each nominee plus a recent photograph for the Society’s electoral booklet, including the opening statement “I declare my acceptance of the objective, purposes, criteria and outcomes of the endorsement process and if endorsed, to declare publicly my affiliation specifically to the ‘Residents and Ratepayers’ and to actively promote and avoid any dilution of the Society’s team brand value” and then to indicate how they propose to deliver on each of the two criteria above.
• Invite all nominees to present their case for endorsement in five minutes to an SGM of members called for that purpose and to answer members’ questions in one minute, with the order of replying rotating.
• Invite each member by mail to rank their preferred order (1, 2, …) of mayor and councillor candidate nominees.
• Report the most preferred candidates for endorsement to the Committee.
The Committee will formally report to members first in confidence and then to the public via a press release.
In the case of normal elections, the Committee will delegate authority to the endorsed candidates to serve as the Election Campaign Team. The Election Campaign Team is to appoint a Campaign Manager.
In the case of a byelection, the Committee will delegate authority to the endorsed candidate(s) to serve with RDRR’s elected representatives on Council as the Byelection Campaign Team. The Byelection Campaign Team is to appoint a Campaign Manager.
The RDRR Committee will co-opt all endorsed candidates on to the Committee to ensure coherence between RDRR’s policies and its election and byelection platforms.

Dissolution
The Society shall not be dissolved except by members at an AGM or at a Special General Meeting convened for that purpose. A two-thirds majority of members present and voting at such meetings is required for the passing of a dissolution resolution. After being dissolved the funds and property of the Society are to be distributed by way of transfer as determined by a two-third majority of the members present and voting at the dissolution meeting to a society or societies which have objects similar to those of the Society.

Alteration of Rules
No alteration or addition to the Constitution and Rules of the Society shall be effected unless at a Special General Meeting of members, of which due notice has been given to members within 14 clear days of the meeting, not less than two-thirds of the members present and voting assent thereto.

Pecuniary Benefits
Notwithstanding any other clause in these rules no member or person associated with that member shall in their capacity as a member or associated person be permitted to make any pecuniary gain from the Society. Any amendment to this clause under the alterations provision of clause 18 of these rules may not be made without the prior written approval of the Inland Revenue Department.

These are the Constitution and Rules of the Rotorua District Residents and Ratepayers Incorporated as adopted at an SGM held by email of the Society 20-30 April 2020. 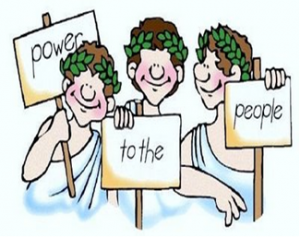